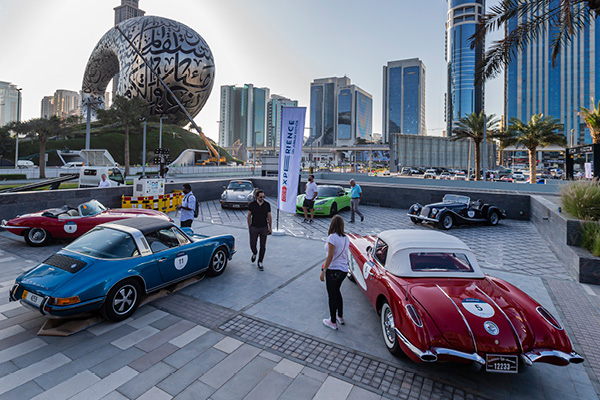 24 Feb 2022, Dubai, United Arab Emirates: 1000 Miglia Srl – the Italian company that organises the 1000 Miglia, also known as “The Most Beautiful Race in the World” – and Octanium Experiences LLC have successfully completed the first ever 1000 Miglia Experience UAE Prologue over two days of thrilling competition, announcing as winners Hannes Waimer and Hans Hotfiel sweeping to overall victory in their 1969 Porsche 911E.

Forty-three participants commenced the Prologue from the start line of the 25Hours Hotel in One Central Dubai on Saturday, February 19th – making this officially the largest classic regularity rally that has ever been held in the UAE. From Dubai – where the Italian ambassador to the UAE His Excellency Nicola Lener, waived the starting flag – the teams began an incredible 700km journey that would take them to the twisty hills of Hatta, the rolling coastline of Fujairah, the towering peak of Jebel Jais in Ras Al Khaimah and finally returning to One Central via the charming villages of Sharjah and the historic fort of Falaj Al Mualla in Umm Al Quwain.

Prior to the Prologue, Octanium Experiences LLC hosted the 1000 Miglia Prologue Night – a live gathering of participant vehicles and select collector automobiles at the 25hours Hotel in One Central, Dubai on February 18th. The sumptuous evening event drew over 3000 members of the public, automotive enthusiasts and car collectors for a celebration of the rally participants in an iconic location situated next to the newly-opened Museum of the Future on Sheikh Zayed Road.

German Wilfried Porth with various media representatives as his navigators achieved an impressive second place overall in a 1968 Mercedes-Benz 280SL, while Egyptians Ismail Tamraz and Amro Tamraz Mohamed took the bronze position in their 1968 Porsche 911 Targa.

In the 1000 Miglia category for cars built from 1927-1957, Suphi Koseoglu and Anne Wencelius achieved the class win in their 1954 Austin Healey BN1 100/4 – an impressive feat considering it was the oldest vehicle participating in the rally.

The highly competitive Jubilee class for cars built prior to 1971 saw the gold medal go for the second time to Hannes Waimer and Hans Hotfiel in their 1969 Porsche 911E.

Finally, in the Contemporary Icons class for significant vehicles built after 1971 victory was secured by Martin Alva and his co-pilot Mishant Gwalani in their 1982 Porsche 911 – ensuring that a Porsche 911 took victories in three out of the four possible categories in the 1000 Miglia Experience UAE Prologue.

Octanium CEO Martin Halder said: “The first 1000 Miglia Experience UAE Prologue was an enormous success, and a major step forward in our plans to bring the most beautiful race in the world to the UAE. We hosted 43 participants over two days of exciting rallying, preceded by an unprecedented 3000 people attending our evening Prologue night at the 25hours Hotel at One Central in Dubai.

“I warmly congratulate the victors of our Prologue event on a race well run against tough local and international competition. I would also like to take this opportunity to thank the UAE Government, the UAE Ministry of Interior and the Police for its stalwart support, the various Tourism Authorities for ensuring smooth passage through the Emirates, and our valuable partners for their presence and assistance throughout the rally. Special mention should go to our Prologue Night partners Flat 12, Dubai Drives and Supercars Majlis, which provided a stunning range of vehicles old and new to ensure our first gathering was a tremendous success.

“Most of all, I would like to thank the participants, without whom this event would not be possible. Their dedication, hard work and love of classic automobiles has paid off with a successful rally that proves the fire burns strong in the Emirates for classic sporting events. We are already working hard for our main event – the 1000 Miglia Experience UAE Jubilee Edition in Q4, 2022. With 100 teams expected to attend from across the world, we believe it will be the absolute pinnacle of the UAE’s winter sporting calendar.”